Ranger Boats are the best on the market, but one improvement for the Fisherman models I’ve discovered is to extend the rod box length.

With the new Ranger FS series (beginning in 2015), you can extend the 8-foot-6 rod box to accommodate 9-footers. Ranger Fisherman models from 2013-14 have 8 1/2-foot rod boxes and there is no point in extending them as you will not be able to fit a 9-footer with the modification. In 2012 and older models, you can extend the standard 8-foot box to accommodate  8 1/2-foot rods.

To extend your rod box, all you need is a screwdriver or cordless drill with a “star” bit to remove the front access panel, and a knife with a serrated edge (think steak knife). 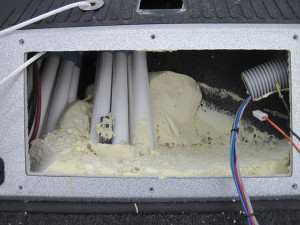 1. Remove the screws holding the front access panel in place, and set it aside. Also remove anything else in the way, such as power leads or a retractable anchor rein. You will now be able to see the ends of the white rod tubes. On older models they will be to the left of the opening (top photo); on 2015 and newer models, they are centered in the opening.

2. Reach up inside with both hands and while you stabilize the tube you plan to cut with one hand, use the other to saw the end of each tube off. Be careful that you do not cut into any of the wires that you’ll see. You’ll end up with small white disks as you can see in the second photo. 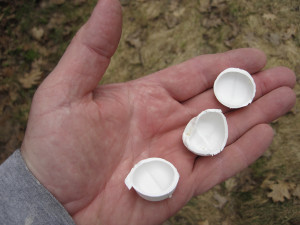 Beginning with the FS series in 2015, you can cut off the ends of the four middle rod tubes of the upper tier. There is no point trying to extend the tubes on a 2013-14 model as they should be 8.5 feet long. On 2012 or older models, you should be able to cut the ends off all six tubes in the upper tier. If you cannot tell which tube ends to cut, slide a small flashlight (turned on) into each of the tubes you want to extend in the rod box. The end of the tube with the flashlight in it will glow slightly (unless you’re in direct sunlight). Mark it in some way (a Sharpie works great), and then proceed until you’ve marked each of the tubes you want to extend. Cut off the ends of the marked tubes.

3. A 9-footer will now fit in the 619FS, but it will be tight. To better protect my rod tips and line, I use 9-inch pieces of 1.25-inch inside diameter vinyl tubing, and slide it over the tube until snug (third photo). I buy 36 inches of vinyl tubing at Home Depot (about $12) and cut it into four 9-inch pieces using a hacksaw. You can place vinyl tubing over the cut-off rod tube ends with an older Fisherman model, but it’s not necessary because there will be plenty of space between the end of the 8-6 rod and the inner wall of fiberglass. The tip tops will merely hang outside the tubes and will not rub on the inner hull wall. 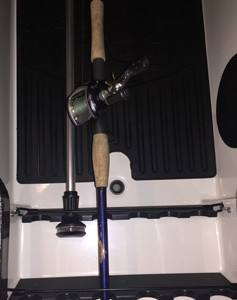 The reason this works is there is about 6-8 inches of space between the ends of the top tier of tubes and the inner wall of fiberglass. Rods do not shift in the box so there will be no rubbing of the tip top or line against the fiberglass. The tip top will not hang up on the edge of the tube when you pull a rod from the rod box.

In the bottom photo, you can see a St. Croix Big Nasty 9-foot Legend Tournament musky rod comfortably resting in the modified rod box of my 619FS.