Thank you for visiting the official website of professional musky angler Steve Heiting. On this site, you can learn more about Steve, find out where you can hear him speak, read some of his articles, and learn what tackle and equipment he uses on the water.

Join hosts Jim Saric and Steve Heiting and others for an informative, fun-filled weekend of musky fishing on legendary musky waters. 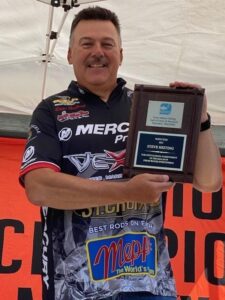 Steve Heiting was inducted into the Fresh Water Fishing Hall of Fame on Sunday, August 21, during the awards ceremony of the National Championship Musky Open in Eagle River.

HOF Director Emmett Brown performed the induction before approximately 1,200 people. He was joined by Jim Saric, a 2012 HOF inductee and Steve’s friend and former boss at Musky Hunter, on the stage.